Classical Education and the Importance of Fathers

When Robert Browning, the Victorian poet, was only five, he saw his father reading, absorbed in a large volume. Robert asked him what it was, and his father answered, “The battle of Troy.” The boy asked, “What's Troy?” His father leaped up, plopped the little boy into a chair, and said, “You are Priam, King of Troy!” and began describing the Trojan War for his son. The cat was Helen, the dogs Menelaos and Agamemnon, the stable boy Hector, and so on. Young Robert was enthralled.

There aren’t many fathers like Browning’s anymore. Classical education emphasizes the great literature of the past, and Christians above all should understand the necessity of knowing the past, because history is a record of God’s work and man’s response.

But twenty-first-century man largely believes that the past is irrelevant and that only the practical and utilitarian has value. We are taught to feel the supremacy of the pragmatic. Consequently, men often have more difficulty appreciating classical education than their wives do. But if fathers don’t learn to love the old books of literature and history and the study of Latin and Greek—in other words, the essential subjects of true education—then their sons, who will be the next generation of family heads, will not learn to value them either, and we fathers will be guilty of perpetuating into the next generation the present unbiblical hatred of the past.

In a December 2005 article in the Washington Post, Michael Gurian highlighted the disappearance of men from modern university campuses, lamenting the fact that, “Where men once dominated, they now make up no more than 43 percent of students at American institutions of higher learning.” Clearly, if men are rejecting knowledge, wisdom, and understanding as manly virtues, perhaps their fathers’ training has had at least something to do with the trend.

In The Classical Tradition, Gilbert Highet speaks of “a class of teacher that we tend to forget, although we should remember them with admiration and affection. These are the fathers who introduced their sons to the great books and the beautiful languages of Greece and Rome, who awakened their interest, and helped them over the dry sands and stubborn fences, and studied along with them, until often the sons became famous men whom we admire as though they had produced themselves out of nothing. That is true fatherhood, not only to beget the body but to help in making the mind of your son.”

Many fathers referenced in Scripture and history are very poor examples of this; many shirked the duty of helping to make a son’s mind. On the other hand, many dads have been wonderful examples of devotion, of willingness to forego their own pleasure and sometimes their welfare, for that of their children, because they have a vision for generations rather than for their own lives alone.

As a Christian school headmaster, I’ve seen this principle carried out numerous times: faithful fathers blessing their sons and daughters by their personal obedience to the gospel and their willingness to live out before their children that sacrificial living spoken of above, and faithless fathers cursing their children through their unfaithfulness. Truly, the sins of the fathers will be visited upon the children unto the third and fourth generations. Fathers “misunderestimate” their importance to their sons’ well being at their own peril.

Isaac Casaubon, a Reformation scholar, was learning Greek from his father at the age of nine when news of the St. Bartholomew's Day massacre drove them to the hills; his father continued the Greek lessons in a cave. I guess we know what Isaac’s dad thought was important.

When Montaigne was a child, his father hired a Latin tutor for his son; the tutor was required to speak to the boy only in Latin, as was the rest of the family. Young Montaigne learned Latin as his native tongue, and for the rest of his life he read for pleasure in the ancient authors. His father taught him Greek by making it a game, a private language they could use between them.

The English statesman William Pitt the Younger was taught by his father, who would have William translate aloud at sight from the Greek and Latin classics. He was skillful at this by the time he was a teenager. It is to this education that Pitt later attributed his immense command of language and his fertile imagery in the famous speeches he gave in Parliament.

John Stuart Mill came from a large family. Mill’s father began teaching him Greek when he was only three, and Latin when he was eight. Under his father’s tutelage, by the time Mill was twelve years old he had read most of the Greek and Roman poets, philosophers, and historians in the original languages. By his eighth year, Mill had read a dozen of the great English historians, including Gibbon's Decline and Fall of the Roman Empire. Mill’s father walked an hour every morning for his health, and for ten years took John along, questioning him about his reading, explaining difficult points, and suggesting other reading for the boy to follow.

If we want our sons to love learning, desire knowledge, and appreciate our intellectual inheritance, we must do what these fathers did: we must model it by loving, desiring, and appreciating those things ourselves. It is not enough for mom to believe in the value of books and to love them; it is not enough to send them to a good classical Christian school. If dads despise learning, by word or apathy, will the apple fall far from the tree? Very few fathers would say, “Learning's a waste of time, boy;” but many say it very clearly by their apathy. Few fathers would say to their children, “The gospel may be true for you, but not for me.” Likewise, far too many say it with their actions.

The most crucial element in a son's education and training in righteousness is not the curriculum he follows, but his father’s example of learning and godliness. The best training is a father’s selfless devotion to his God, his wife, and his children. The best curriculum is a father’s choice of conversation at the dinner table, the questions he asks of his sons and daughters, the books he reads to them, and especially the books he reads late at night when no one is watching to see if he turns on the television. 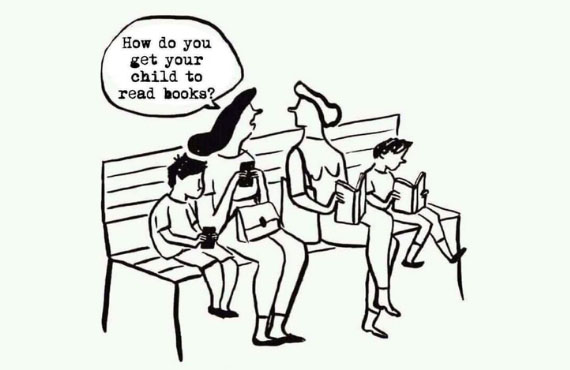