With doctors giving her only an 8 percent chance of survival, Anna Hayes’ life story is one of perseverance and God’s provision.

The Mars Hill Academy alumna was born prematurely at 25 weeks, weighing only 1 lb. 11 oz. She spent the first three months of her life in the Miami Valley Hospital Neonatal Intensive Care Unit in Dayton.

“I wondered how we would plan for an infant funeral,” her father Justin Hayes recalled. “The doctors said if she survived, she would be blind and would never speak or walk. Every step of the way, we were told what she couldn’t do – run, ride a bike, read, swim. But Anna has pleasantly persevered.”

To the bewilderment of doctors, Anna not only has overcome the challenges of her premature birth, but she also has thrived. Mr. Hayes describes her unexpected accomplishments as an "exceptional provision of God's grace."

Anna came to MHA in Kindergarten. Although her family loved the school, they sought reassurance that the classical, Christian education provided by MHA was the right fit. Multiple assessments from various agencies over the years — even by area public school districts — repeatedly verified that there is no other academic structure more suited to meet her needs.

“They all contended the best place for her to maximize her abilities was MHA,” Mr. Hayes said. “Anna exhibits strong childlike faith in Jesus Christ, has a strong work ethic, loves school, and flourished spiritually, socially, and cognitively in the MHA environment.”

Mr. Hayes said the teachers worked to ensure Anna was supported and challenged academically. In fact, she was named to the Headmaster’s List for academic achievement. Her schedule included traditional classical classes like antiquities and protocol, as well as an independent study of missionaries and service as a front office aide two days a week.

"The staff at Mars Hill Academy provided layer upon layer of support, encouragement, wisdom, and love for us that is overwhelming," said Mr. Hayes.

“Anna’s love for MHA and her servant’s heart is evident in her work as an office intern,” said Admissions Director Patsy Hall. “She always is eager to help and is conscientious in her work. It is a true joy to have her in the front office.”

“What I like best about Mars Hill is the Christian education and the teachers,” she said. “I liked all my classes. I also like to come back to the office and help several hours every week.”

Anna, who recently earned her driver’s license, enjoys reading, crafting, playing online games like Words with Friends, and exercising. She also works with the youth at her church and makes and donates hats for infants in the NICU. 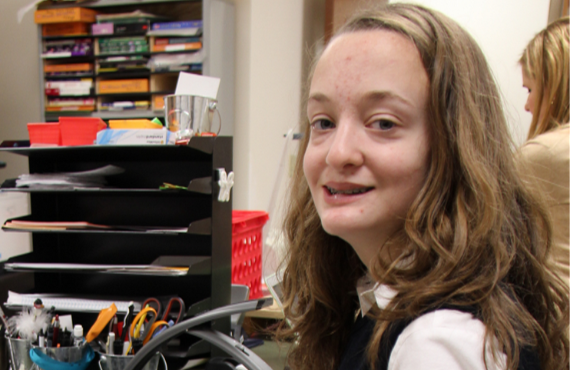