Q: What is something notable about your time at MHA?

A: I started at Mars Hill in its founding year as a fifth-grader.

Q: What have you done since your time at Mars Hill Academy?

A: After being thrown into the experimental Mars Hill Academy education, I graduated from the United States Air Force Academy with a degree in mechanical engineering and earned my master's in aerospace engineering. My wife, two children, and I recently moved from Germany to Wright Patterson Air Force Base where I manage research and development programs as an Air Force officer and engineer.

Q: How did MHA impact your life?

A: The best thing I took away from Mars Hill was having exceptional, godly influences in my life. It has stayed with me all the way through my life up to now.

Q: How did your classical Christian education prepare you for life beyond high school?

A: You leave MHA with a certain level of maturity — emotional maturity, maturity in your faith, adult wisdom — that I don't think is common for a lot of students in the world today. That gave me a certain level of confidence going into college and helped me pursue challenges, want to be a problem solver, and set the bar high for myself.

In his free time, Mr. Swanson enjoys spending time with his family, camping, and climbing.

David Swanson is shown here, second from left, in a photo from the MHA archives. 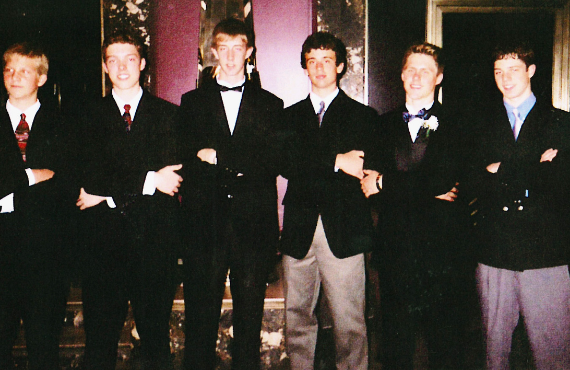