While Megan Peterson’s peers were preparing to head off to college, she was packing her bags for Thailand. The 2015 Mars Hill Academy graduate decided to spend a gap year interning with a crisis nancy center in the northeastern region of Isaan, named for the Hindu god of death.

“I decided to go to Thailand, because of my passion for learning languages and for cross-cultural ministry,” she said. “I worked at a crisis nancy care home called The Light Center. The Light Center is a home for young women who are facing unplanned nancies and have nowhere to go. The Light Center is the first ministry of its kind in this region of Thailand.”

Thailand is reported to have one of the highest rates of teen nancy in the world, largely due to poor education and rampant prostitution. According to a February 2015 report from the Thai Public Health Ministry, about a quarter of the country’s annual births are unplanned nancies of adolescent mothers, and 20 percent of mothers under the age of 20 have had repeat nancies. Teen nancy increased by 43 percent between 2000 and 2011 and continues to rise.

"One of the reasons why I chose to go to Thailand is because I am very passionate about the pro-life movement. Unfortunately, there is no one fighting for the rights of the unborn in most regions of Thailand," Miss Peterson explained.

According to literature from The Light Center, “The deep shame from an unexpected nancy often leads to abortions, suicide, and girls being abandoned by their families, schools, and community. Thailand is predominantly Buddhist, which teaches that abortion is sin and therefore is illegal; yet illegal abortion clinics thrive. In 2009, there were over 60,000 hospitalizations due to complications associated with abortions. Currently, female adolescents who have an unexpected nancy are seven times more likely to commit suicide than their peers.”

Miss Peterson, who served on two short-term trips to Thailand in 2011 and 2013, was eager to be a part of a ministry that provides a safe house for these women.

“When I heard that The Light Center was going to be the first pro-life ministry in Isaan, I knew that I had to be a part of it right away, and I jumped at the opportunity to be an intern there,” she said. 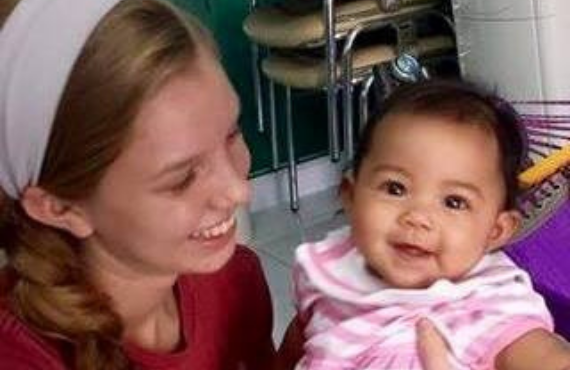